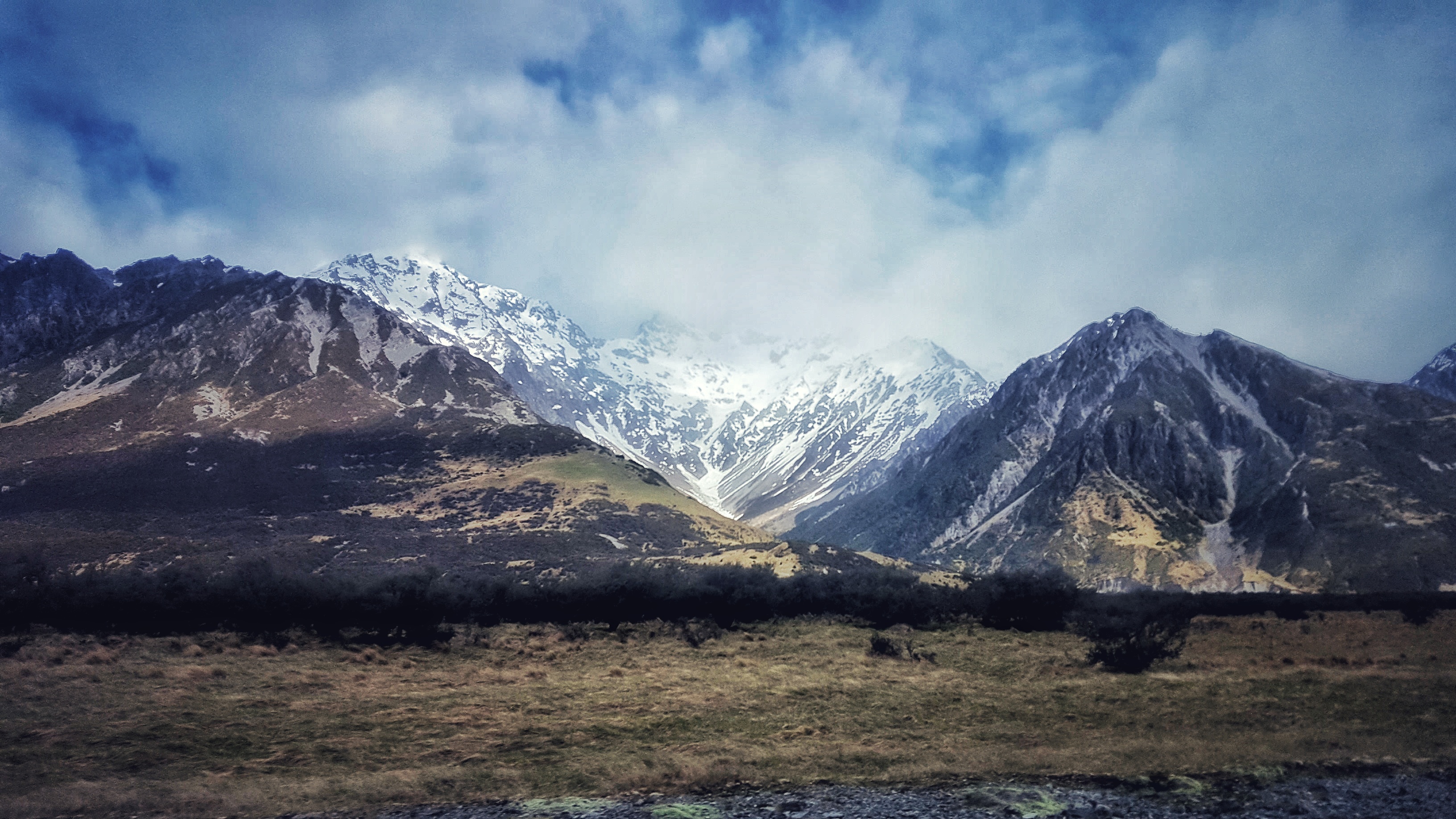 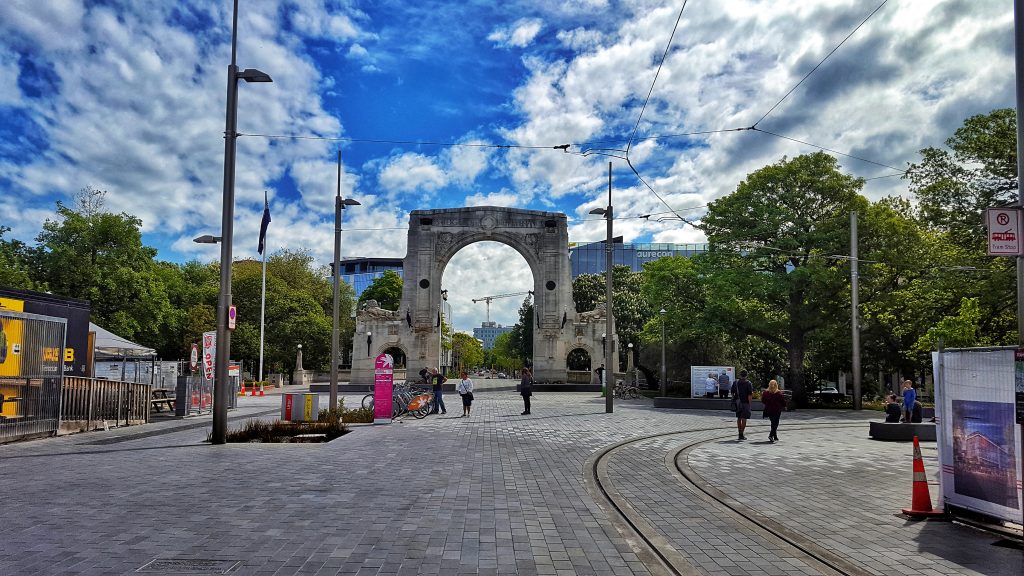 Known as “The Garden City,” Christchurch, boasts beautifully-sculpted parks and gardens reminiscent of Victorian England. The city has a lively student population, is multi-cultural, and is a popular backpacker destination. Though severely damaged by a few earthquakes in the last few years, the city is slowly being rebuilt and the city is moving forward.

A really cool must see is the container shopping park which is a mix match of shipping containers made into, retail shops, cafes and restaurants which are all brightly coloured. Keep an eye out for the archway (as show above) and have a fun ride on the gondola (28NZD) which offers awesome views of the city. 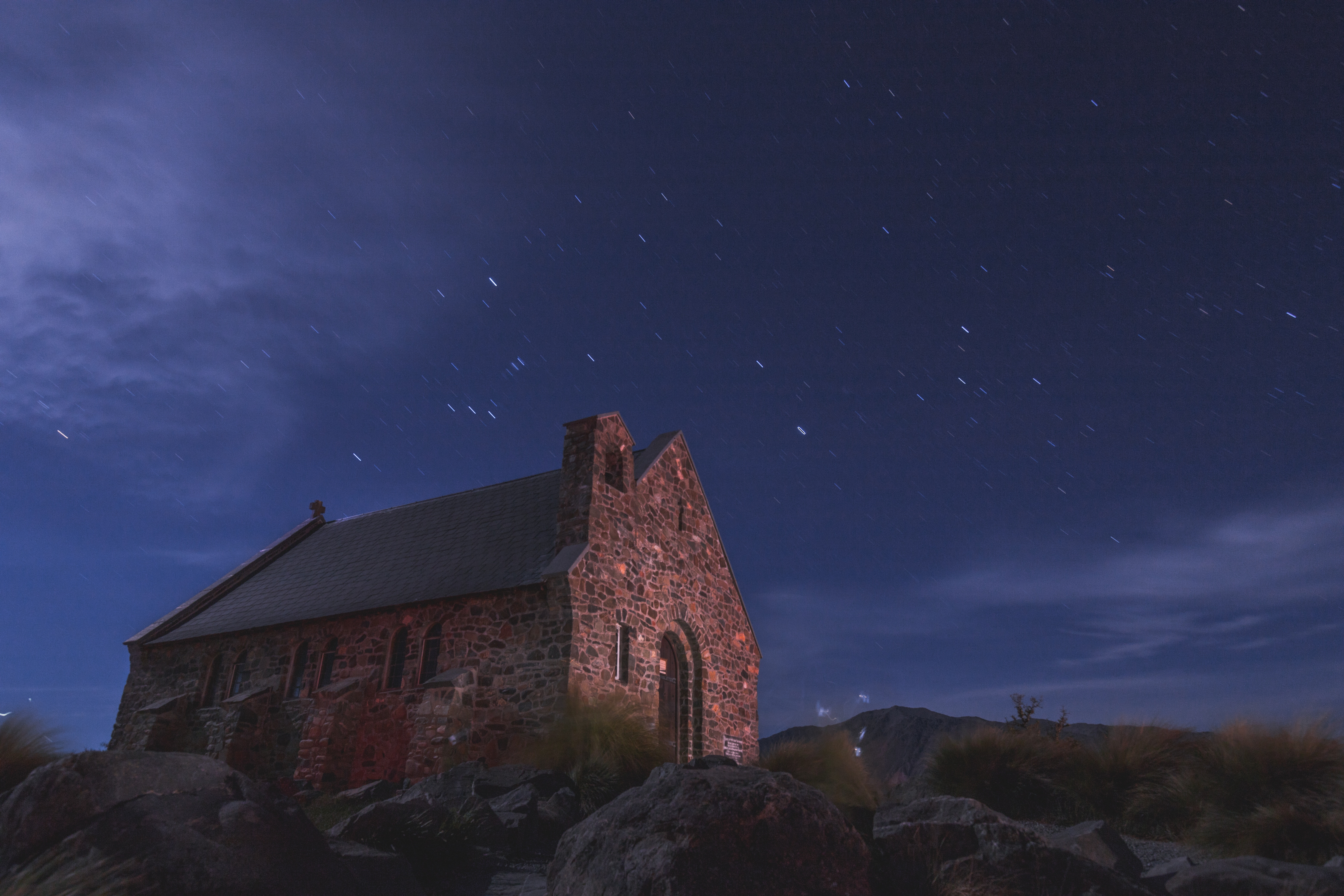 It is the second largest of three lakes in the Mackenzie Basin (the other being Pukaki and Ohau). The lake covers an area of 83 square kilometres and is at an altitude of 710 metres. The name ‘Tekapo’ derives from the Maori words ‘taka’ (sleeping mat) and ‘po’ (night), which is suitably apt considering the stars look beautiful in this part of the world. Tekapo is also part of the largest Dark Sky Reserve in the world, meaning the night’s sky is unbelievably clear to see stars, the Southern Cross, the Milky Way’s satellite galaxies and even the Southern Lights.

The lakes almost unreal milky blue colour comes from the glacial sediment left behind from a retreating glacier and is beautiful to look at.

It is worth stopping at to take in snow-peaked mountains behind the turquoise-blue Lake Tekapo.
If you visit from mid-November to December you will get to see the blue and purple lupin flowers in bloom. During the winter, there are two ski fields in close proximity. Plus, it is a good time to come ice skating, then relax in the most scenic hot pools in the country! 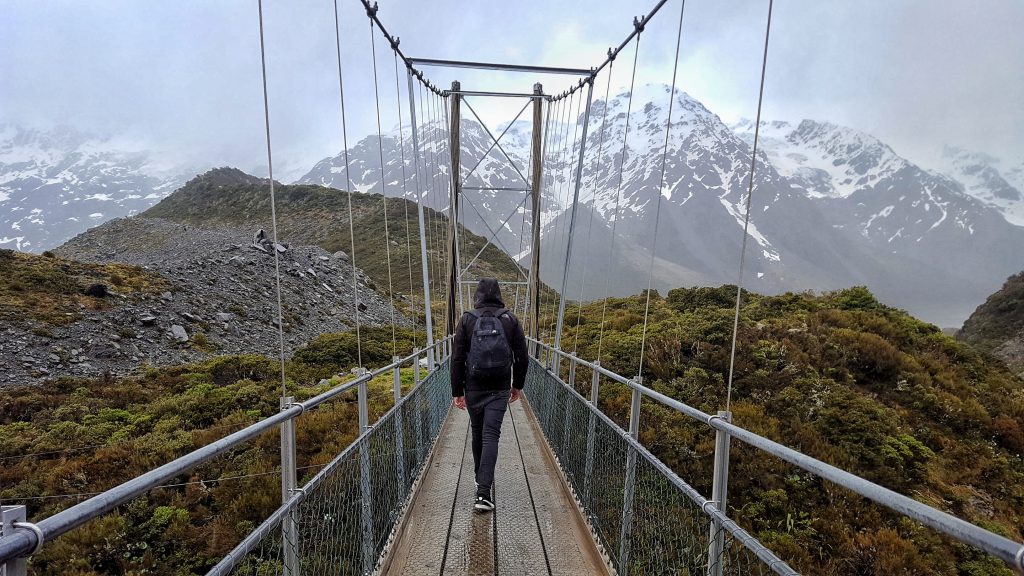 Aoraki/Mt. Cook is New Zealand’s tallest mountain topping out at at a whopping 3,724 meters (12,218 ft) located in the center of the South Island in Canterbury, in one of my favorite regions. Standing tall way above the clouds with its super iconic peak, there’s no mistaking Mt. Cook when you are within a hundred miles of it. It stands out above and beyond the surrounding Southern Alps.

I did the Hooker Valley Walk which has to be the easiest walk to most rewarding view ratio to be found in New Zealand. You could do this walk in your flip flops; it’s such a nice, flat groomed trail, and it’s a really easy walk (dependant on the weather of course) down the Hooker Valley to a glacier lake at the bottom of Mt. Cook.

More icebergs than you could ever want and a few fun swing bridges to bounce along and freak other walkers out on. It’s around a 3 hour return but be sure to give yourself plenty of more time because you will probably stop for photos every 5 minutes. 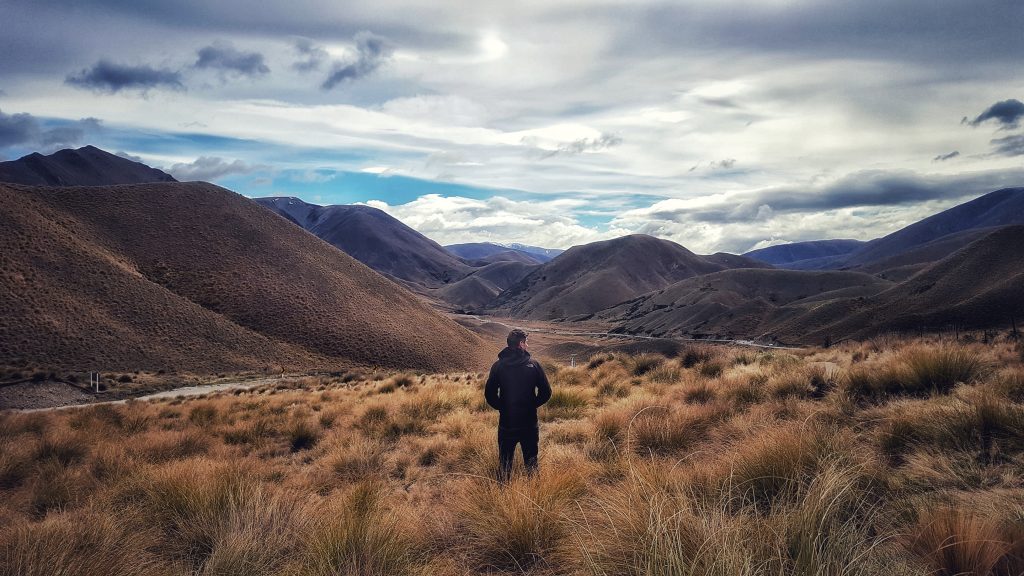 Sandy-coloured tussock-covered mountains stand either side of the tiny road that winds straight through the valley floor. The mountains are so large that they create a dwarfing effect making you think, “Sure, I could climb to the top of that mountain, easy!”

It is definitely a worth while stop for photos and a nice break from driving. 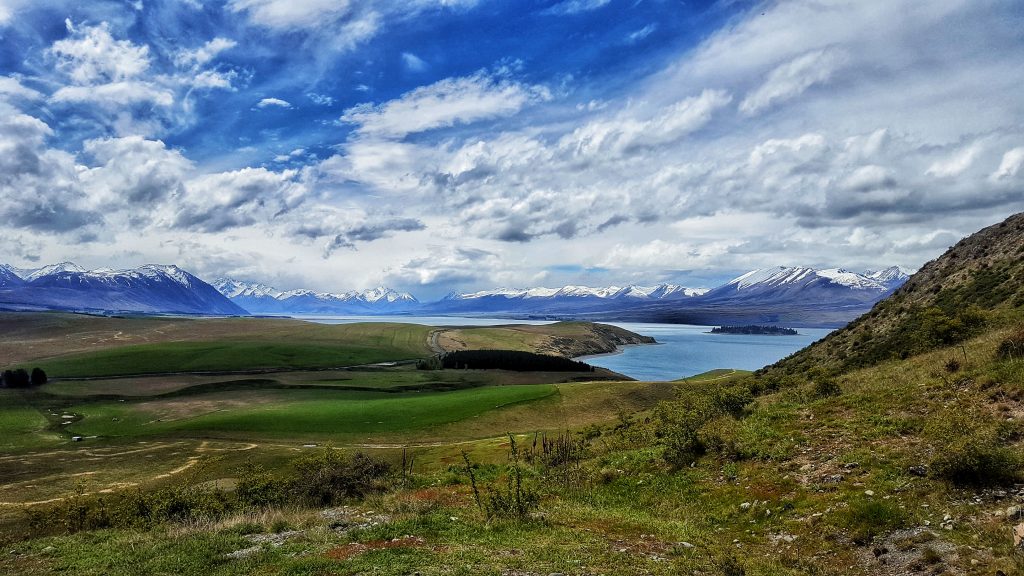 One of my favourites, this lake is famously known as the surrounding setting for ‘Lake-town’ in ‘The Hobbit: The Desolation of Smaug’, Lake Pukaki is another long large jewel in the Mackenzie Basin. Nestled under the shadow of Aoraki/Mount Cook, it was the lakes pure distinctive light, amazing turquoise hues, coupled by the sharp alpine landforms that originally got the attention of Sir Peter Jackson.

He ended up using this particular region three times to backdrop major location scenes in his ‘The Lord of the Rings’ and ‘The Hobbit Trilogies’. 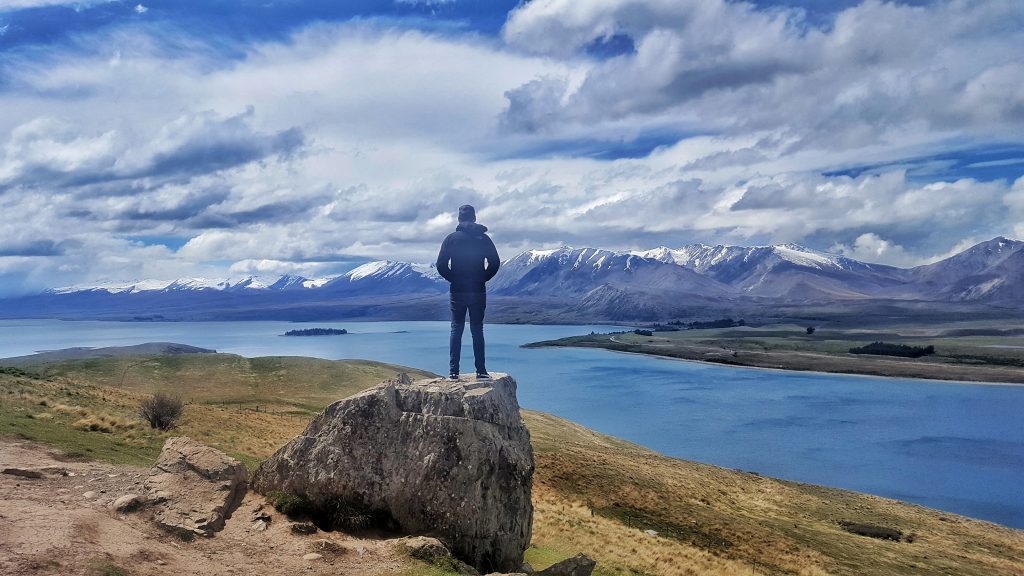 The views from Mount John during daytime are quite spectacular, offering a 360 degree view of the Mackenzie District from the hill top, enabling you to put the panorama setting on your digital camera to good use! There is also Astro Cafe with indoor and outdoor seating as well as day tours of the observatory for those interested in astronomy without the actual stargazing. Hot Tip! Order the hot chocolate for a cool out of this world topping! 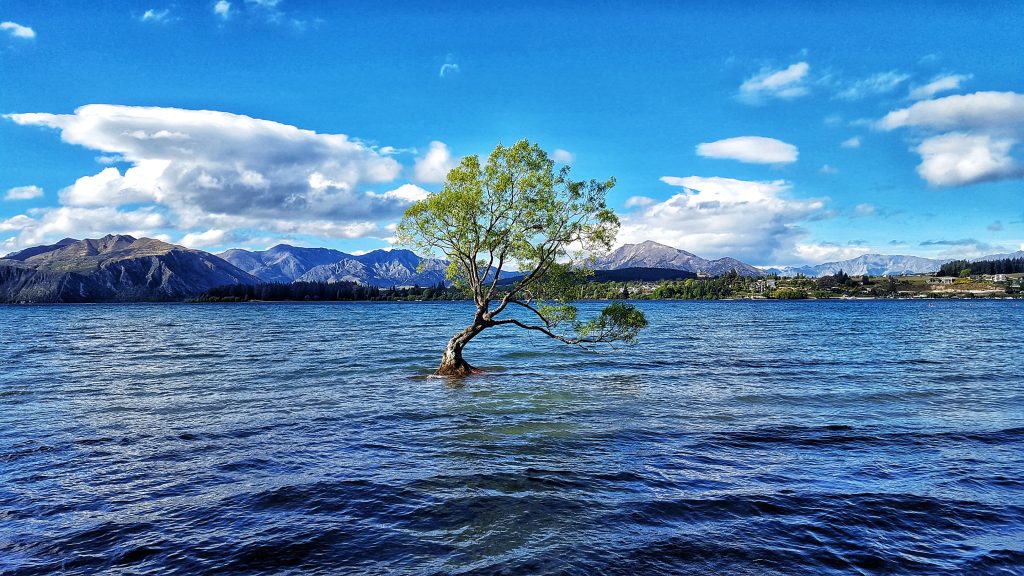 Wanaka is considered to be one of the hidden gem in New Zealand. Since Queenstown is only an hour away, most people tend to skip Wanaka and go straight to Queenstown. If only these people knew what Wanaka offers, they would have to think twice.

Lake Wanaka is the ideal location to snap up some amazing photos of the Lake and neighbouring southern alps, chill out with a Kayak or Paddleboard, grab a bike to explore the lake front, check out the quirkiness of Puzzling World and take a hike to the top of Mt Iron.

And of course…don’t forget to visit the infamous ‘That Wanaka Tree’ (as pictured above).