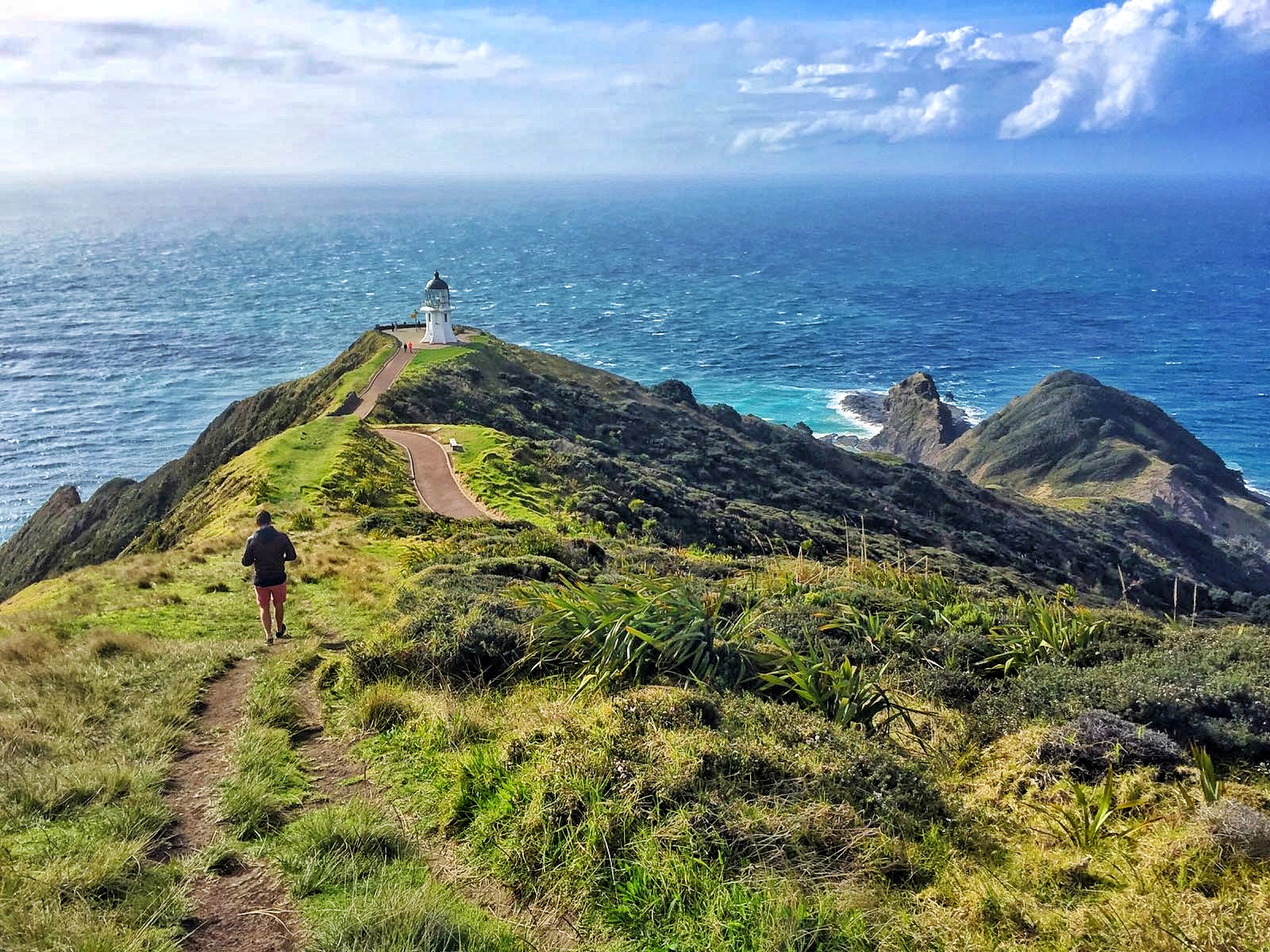 WHAT TO SEE AND DO IN THE NORTH ISLAND

This is an extensive to guide to exploring the Bay of Islands, Cape Reinga, Paihia, Oke Bay and Russell.

New Zealand would be most notably known for its tourist images of the dramatic scenery of the South Island, but for me the North is just as beautiful and even more interesting. Many places have majestic mountains, but the North Island is loaded with attractions that are more New Zealand-esque – most notably the bubbling’s and boiling’s of geothermal activity, and a highly visible Māori culture.

These are some of my favourite places to visit and can be done in a two-day time frame: 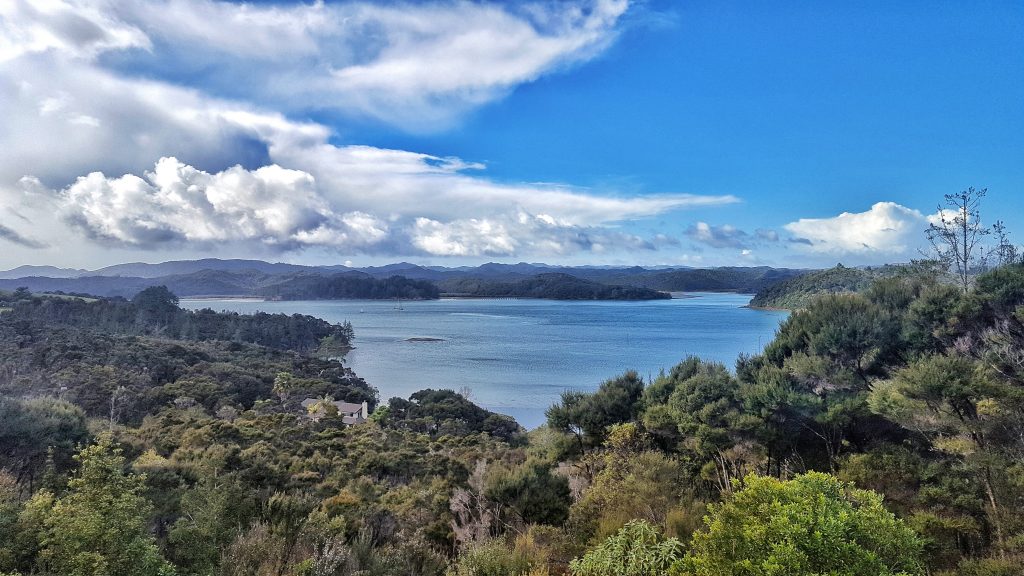 Russell is a quaint and historic town in the Bay of Islands, with lovely accommodation and an excellent range of restaurants. It is isolated on a narrow peninsula giving it an island ambience. It offers one of the most romantic holiday experiences in the country, with its range of top class restaurants and cafes, abundant fresh local produce and seafood, exquisitely restored historic buildings and excellent galleries.

It is also the base for the many water activities in the Bay of Islands including fishing, sailing, and dolphin encounters. There are also wonderful choices of walks from Russell. Flagstaff Hill has magnificent views overlooking the Bay of Islands and it played a significant role in early relations between the local Maori and early British colonials, Tapeka Point Historic Reserve on a headland at the end of the peninsula and Oneroa Bay also known as Long Beach, is a gently shelving beach sheltered from wind and safe for swimming. 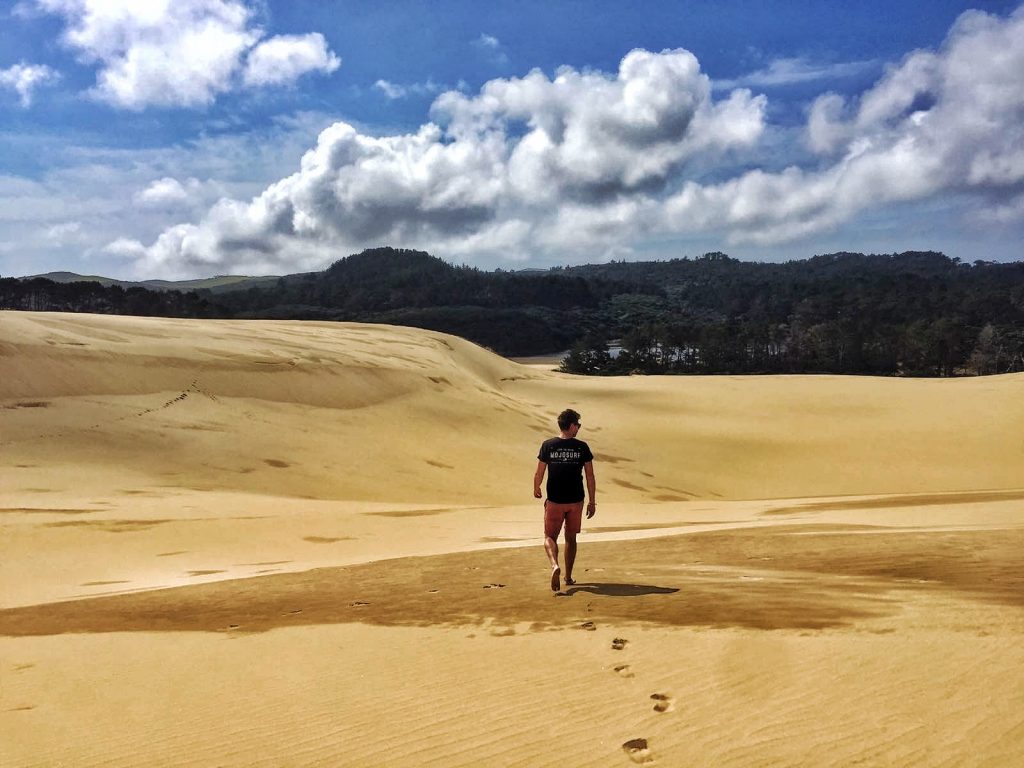 Te Paki Sand Dunes are located on the Aupouri Peninsula, near the very top of the North Island, close to Cape Reinga, the top of the island. You can enter the dunes for free with the option of paying between 10-15 NZD for a body board to go sand boarding.

There is no time limit, but most people only last about an hour as the walk up is quite tiring. Do make sure to explore around the area as there is some amazing scenery to be seen from the top of the sand dunes. Sand boarding is generally done barefoot, which works out well, as you need to cross an ankle-deep stream to get to the dunes. 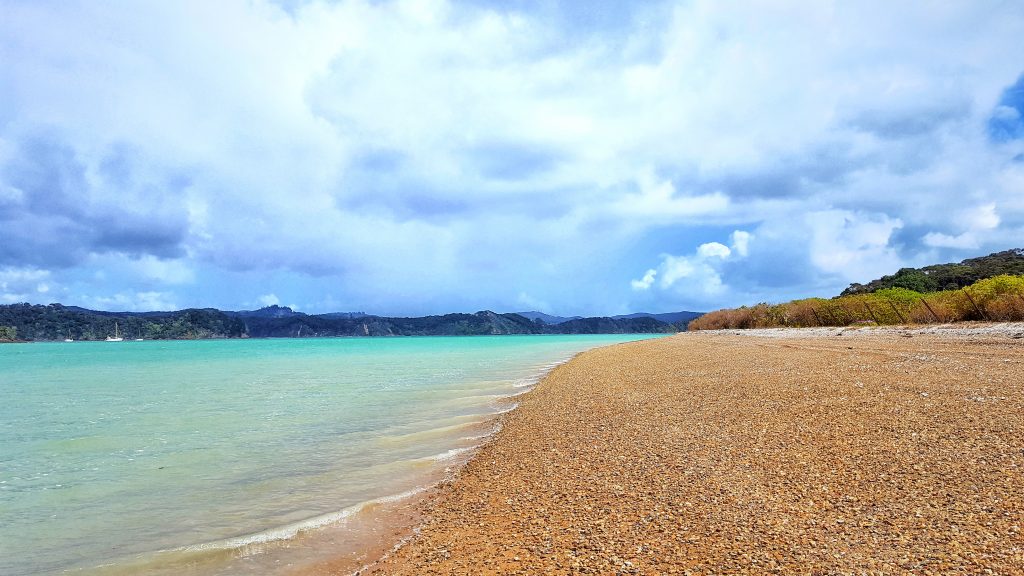 Oke Bay is off Rawhiti Road in the Bay of Islands about 29 km from Russell, and is well worth the drive. With many scenic views and beautiful water this is the perfect place to go swimming and have a picnic in the summer. Also home to the infamous ‘Oke Sea Monster‘. 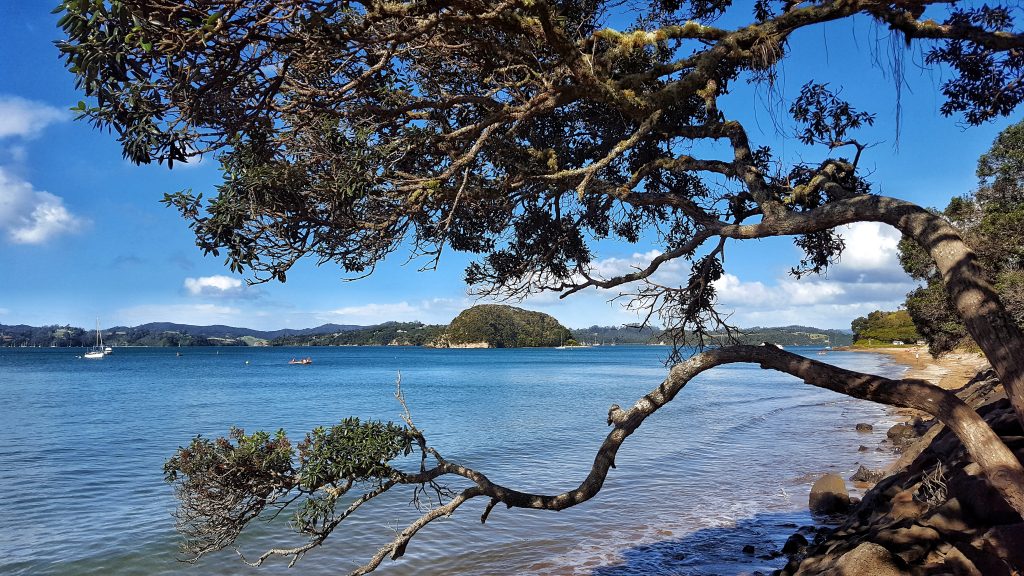 Paihia offers a number of things to do with lots of activities, short walks, tours and attractions to choose from. It is the main tourist town in the Bay of Islands making this an excellent base for exploring the Bay of Islands and Northland.

From the wharf, you can arrange a variety of trips out into the bay, Hole in the Rock, see dolphins and maybe swim with them, catch a fish, explore the many islands by cruise boat or yacht, get dropped on an island to relax or explore, take a scenic flight by helicopter or plane to Cape Reinga or land on the ‘Hole in the Rock’, try parasailing, enjoying aerial views of Paihia and the Bay of Islands.

Close to town is the historic Treaty House at Waitangi which has great cultural significance. In 1840 the Treaty of Waitangi was signed between the Maori and Europeans which marked the beginning of New Zealand as a nation. There are also many walks in the area with a popular walk on boardwalk to Haruru Falls which showcases an impressive waterfall. 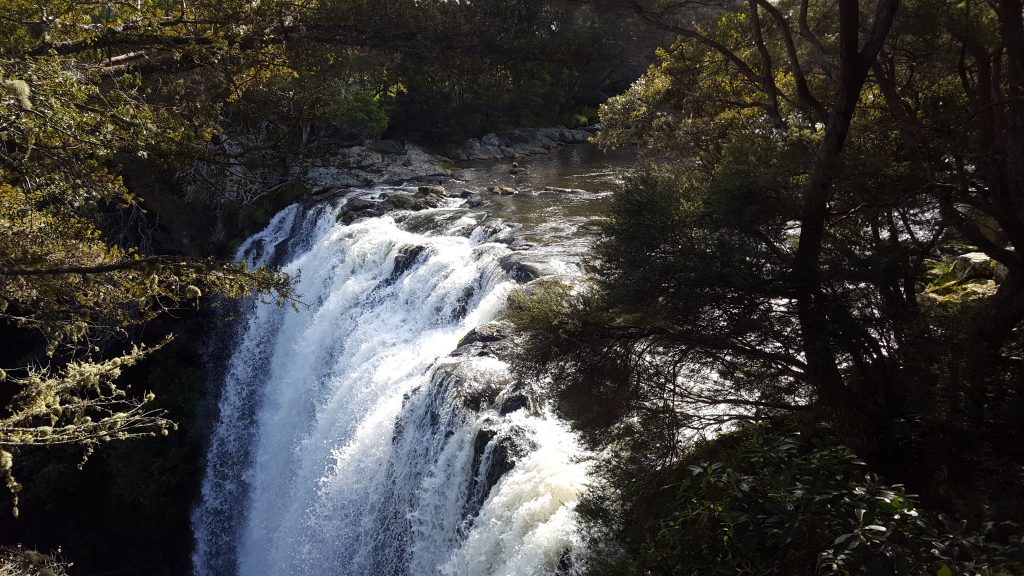 The Rainbow Falls are just out of Kerikeri in the Bay of Islands and can be reached in two ways. There is a four-kilometre walk to get to them from near the Mission House, or you can drive much closer. The walk takes you by two other pretty spots – the Wharepoke Falls and the Fairy Pools. If you are in more of a hurry then drive down Waipapa Rd, turn into Rainbow Falls Rd and it’s a short walk from the car park.

Either way, the falls are worth the effort. Extra points if you manage to see the rainbow! 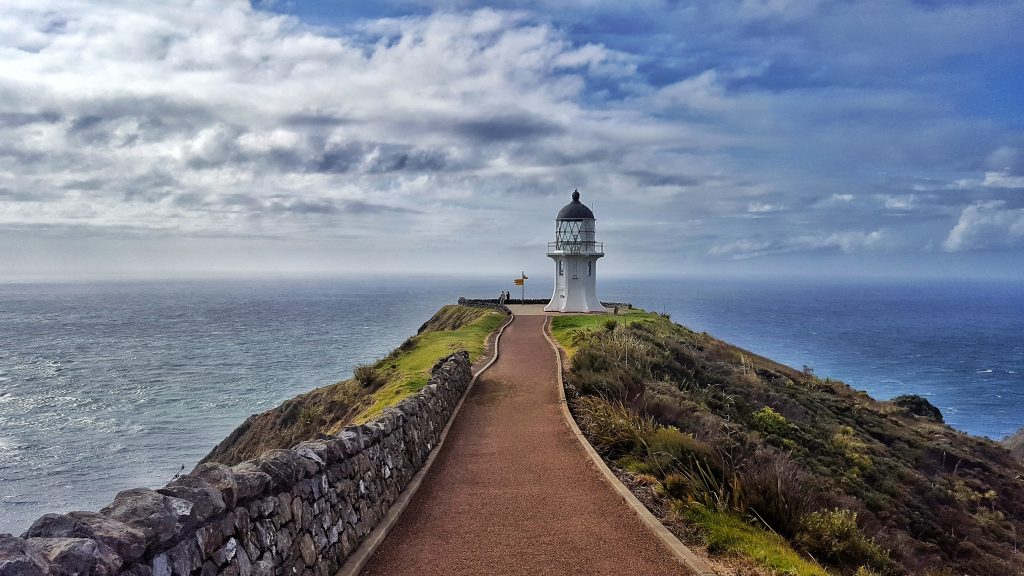 The bottom of the world, the very top of New Zealand and where two oceans collide.

At Cape Reinga there is a lighthouse, built in 1941 and fully automated since 1987, is the most prominent feature and a well-known New Zealand landmark. From the lighthouse, there is a magical view of the meeting of the two oceans, the Tasman Sea and the Pacific Ocean. The swirling surf where the currents from the two collide are clearly visible. On a fine day, the Poor Knights Island group can also be seen some 55 kilometers (34 miles) to the north. 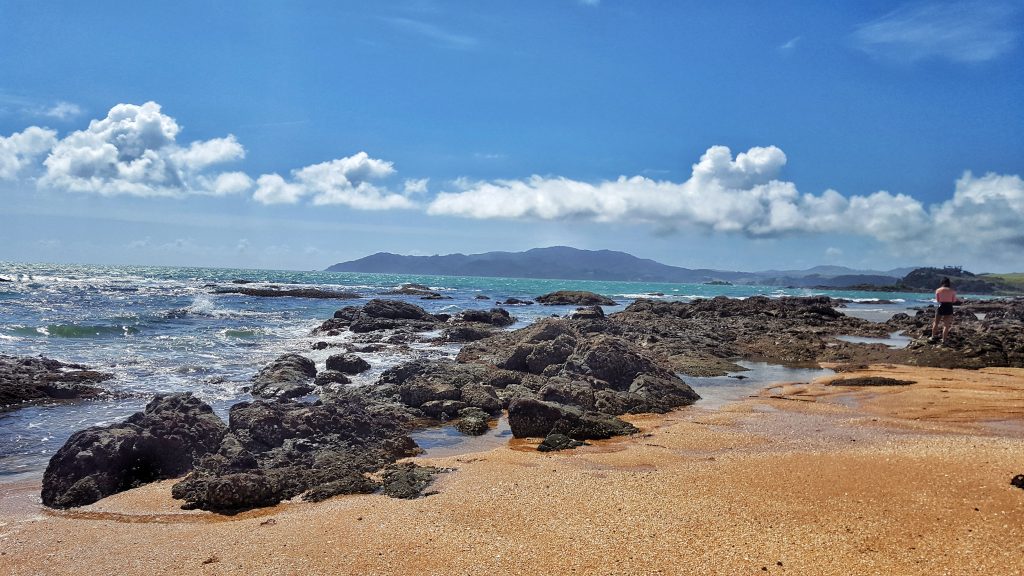 The bay itself is 600 metres (2,000 ft) wide, northwest-facing bay in the Tasman Bay. It lies just north of the Horoirangi Marine Reserve, between the tidal island Pepin Island and the mainland. It provides a natural boulder barrier from the sea for the Wakapuaka estuary.

There is evidence that Māori used the area around Cable Bay from about 1150 for fishing and camping. There was also a pā on Pepin Island near the end of the causeway linking the island to the mainland. Both the pā and the bay itself were known as Rotokura.

Definitely worth a visit to check out the beautiful beach and scenery. 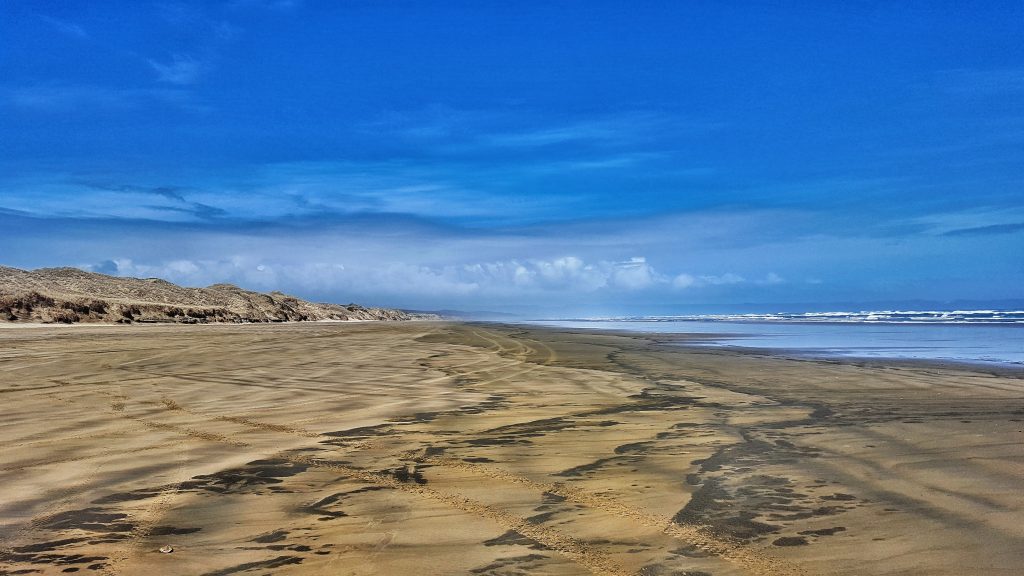 This aptly named beach actually stretches for about 60 miles and is a major draw for tourists and backpackers in New Zealand. It’s a long stretch of white sand where travellers and locals often take their vehicles (be sure not to get stuck though). If you really want to experience 90 Mile Beach, you need to be in a 4×4 vehicle cruising along the coast with sand dunes on one side of your vehicle and the Tasman Sea on the other.

90 Mile Beach itself only stretches for about 60 miles. When missionaries had to travel the beach via horseback, they assumed their horses could travel 30 miles each day. It would take them three days to travel the beach, so they ultimately named it the 90 Mile Beach. Their math was flawed as they didn’t take into consideration the fact the horses travelled slower in the sand.

With white sand, beautiful blue water, and the surf stretching as far as you can literally see, it’s an absolutely stunning sight.